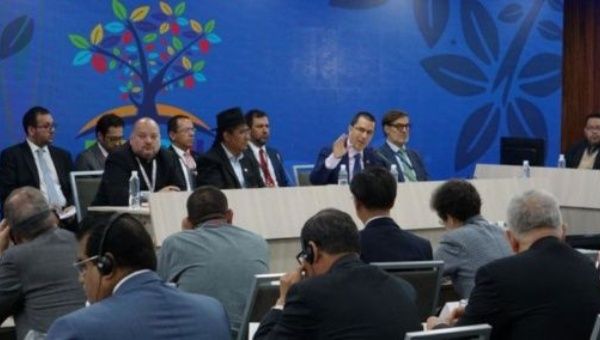 Non-Aligned Countries demanded on Sunday that the United States Government immediately lift the economic and financial sanctions imposed on Venezuela.

In a statement signed by the members of the international organization, which met for two days in Caracas, the delegations of 120 NAM countries indicated that only Venezuela can decide its fate, no other State can intervene in accordance with the United Nations Charter.

NAM countries reject foreign intervention in the South American country and reiterated their commitment to redouble efforts aimed at channeling the Government and the Venezuelan opposition to find a peaceful solution to the problems of the country.

The group of countries supports the Montevideo mechanism, the mediation of Norway and other mechanisms that seek stability in Venezuela.

Prior to reading the statement in support of Venezuela, several representatives of the entity participated in a session held on Sunday morning, in the framework of the Ministerial Meeting.

For his part, the foreign minister of the Islamic Republic of Iran, Javad Zarif, said that the sanctions of the United States against sovereign countries are part of pure terrorism.