U.S. Caused $4.5 Billion in Losses to Cuba Over the Last Year 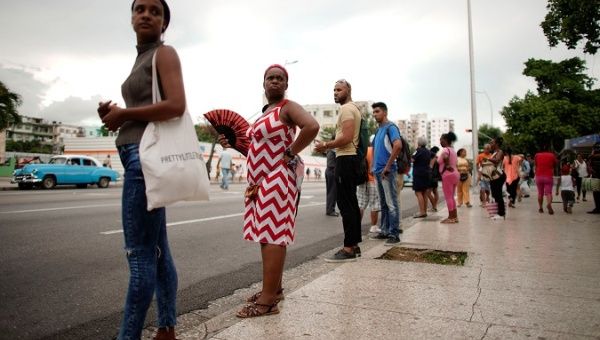 Cuba’s Foreign Minister Bruno Rodriguez on Friday presented a report on the impact caused by the U.S .blockade policy on the Cuban economy over the last year.

“The U.S. blockade against Cuba impacts, as never before, on the everyday life of every Cuban family, in every sector of our economy, in every social development project in the country,” Rodriguez said and anticipated that his country will insist on the elimination of such arbitrary policy before the international community.

“The U.S measures have a political motivation. Our Government will exercise its sovereignty and self-determination.”

On November 6, for the twenty-eighth occasion, Cuba will present to the United Nations General Assembly the draft resolution entitled “Need to End the Economic, Commercial and Financial Blockade Imposed by the United States of America against Cuba.”

This diplomatic initiative occurs in a context of growing aggressiveness against the Caribbean country. Over the last two years, U.S. President Donald Trump has strengthened a 60-year-old policy which attempts to use coercion instruments to overthrow Cuba’s democratic government.

As a result of the above, and as a side effect of the aggressions the U.S. is deploying against Venezuela, Cuba is going through a fuel shortage, as shipping and insurance companies feel threats and pressures from Washington.

The #US blockade vs #Cuba has been tightened. It is deliberately aimed at affecting the everyday life of our people, generating scarcities & difficulties, depriving us from financial resources & suffocating our economy. It is a genocidal, criminal policy that violates Intl. Law. pic.twitter.com/hCc4WNctiB

Appreciated from a broader time perspective, however, the damage caused to Cuba is substantially greater and reaches billions of dollars.

Since the 1960s, the U.S. blockade has caused losses to Cuba of over US$138.8 billion measured at current prices, according to estimates from local authorities.

Accumulated damages amount to over US$933 billion in real terms, that is to say, taking into account the depreciation of the dollar against gold.

From April 2018 to March 2019, Trump’s new wave of sanctions brought about US$4.3 billion in direct, material damages, as the Cuban minister denounced.

“Over the last year, the resurgence of the blockade has continued to be the central pivot of the U.S. government policy towards Cuba, with more and more notable effects on its extraterritorial application,” Rodriguez recalled.

“The blockade policy continues to represent a brake for the development of the Cuban economic potential, for the implementation of the National Economic and Social Development Plan, for the achievement of the 2030 agenda and its sustainable development goals.”

#Cuba will present for the 28th time at the UN General Assembly the resolution that demands the end of the economic, commercial and financial blockade imposed by the #USA against #Cuba ”, which has been repeatedly backed by the int. community. #EndTheBlockadeNow #UnblockCuba pic.twitter.com/nrhlaTebMT

The Republican administration’s resumed hostility towards Cuba began with the application of apparently small restrictions on U.S. citizens’ trips to the island.

On the first moment, licenses for passenger and recreational cruisers, authorizations for educational group visits, and licenses to private airplanes were removed.

Subsequently, however, punitive actions became tougher as the White House began to reinforce instruments aimed at halting foreign direct investment flows towards Cuba, a socialist country which has been attracting significant European investments in its tourism sector since the 1990s.

To obstruct new investments, Trump then activated Title III of the Helms-Burton Act, which allows U.S. nationals to file lawsuits before U.S. courts against countries, companies and persons who did business with companies or properties nationalized after the triumph of the Cuban Revolution in 1959.

If Cuba had received the income it ceased to receive as a result of US sanctions, its gross fomestic product would have grown by an average of 10 percent over the past 10 years, Minister Rodriguez denounced.

Although the damage is large,​​​​​​ the U.S. will get “no political concession from our government. They have failed for six decades and they will continue to fail.”