US Vows to ‘Reinforce’ Sanctions, Accuses Venezuela and Cuba of Stirring Regional ‘Strife’

Elliott Abrams reiterated support for Guaido and denied that sanctions are damaging the Venezuelan economy. 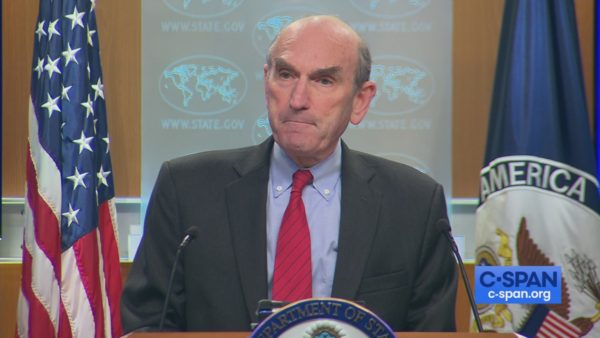 Caracas, November 28, 2019 (venezuelanalysis.com) – The Trump administration has pledged to continue economic sanctions against Venezuela in its ongoing bid to oust the Maduro government.

Speaking at a press conference at the State Department Wednesday, Special Envoy for Venezuela Elliott Abrams defended US regime change policy, which he said would “continue.”

“There’s no change… What is next is, I would say, a continuation of the current policy,” he said in response to questions about the status of US efforts more than ten months after recognizing opposition politician Juan Guaido as “interim president” of Venezuela.

Guaido proclaimed himself head of state in January and has gone on to lead several unsuccessful efforts to topple Maduro, including a failed military putsch in April.

Asked about the efficacy of US sanctions, Abrams assured reporters that the measures are cutting off vital funds for the Venezuelan government. However, he acknowledged that he “would like to see, obviously, the sanctions work better,” adding that “there are plans to reinforce the effort.” He did not offer further details.

“The gravy train days that they had 10 years ago are over,” he announced, referring to the period when Venezuela had the highest minimum wage in Latin America and among the lowest levels of inequality.

Abrams went on to deny that US sanctions are negatively impacting Venezuela’s economy, citing a paper authored by former Guaido Inter-American Development Bank envoy Ricardo Hausmann claiming, “the bulk of the deterioration of living standards occurred long before sanctions were enacted in 2017.” Hausmann was a key architect of neoliberal policies in Venezuela in the 1980s and 1990s and has been a longtime government opponent.

The conclusions of Hausmann’s study have been disputed by the DC-based Center for Economic and Policy Research, which published its own report in April finding sanctions responsible for at least 40,000 deaths since 2017. The study likewise claims that sanctions amount to “collective punishment,” blocking any possibility of economic recovery in the Caribbean nation.

Washington has dramatically ramped up its sanctions regime since January, imposing an oil embargo which has since been escalated to a sweeping ban on dealings with Caracas under threat of secondary sanctions.

Abrams likewise rebuffed reporters’ concerns about Guaido’s “lack of momentum,” suggesting that “hundreds of thousands… went to the streets on November 16.” The claim was scrutinized by journalists who pointed out that viral video footage purported to be from the protests was in fact taken in January.

“There is evidence beginning to build of an effort by the regimes in Cuba and Venezuela to exacerbate problems in South America,” he added.

In recent weeks, the region has been rocked by massive anti-neoliberal protests that have shaken right-wing governments in Ecuador, Haiti, Chile, and Colombia. Government spokespeople have frequently attributed the uprisings to “meddling” by Caracas, while the Organization of American States has branded them a “destabilization strategy” by the “Bolivarian and Cuban dictatorships.”