By Lucas Koerner and Ricardo Vaz/ Originally published in Venezuelanalysis. 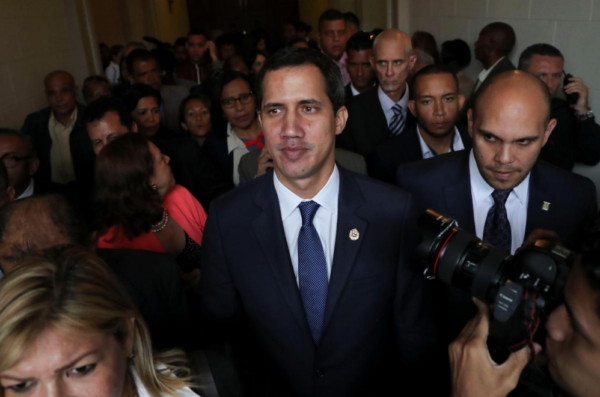 USAID has pledged $52 million for Juan Guaido and the Venezuelan opposition. (Reuters)

Caracas, September 25, 2019 (venezuelanalysis.com) – Self-proclaimed “Interim President” Juan Guaido and the Venezuelan opposition have been given US $52 million by the Trump administration.

According to a Tuesday statement from the United States Agency for International Development (USAID), the funding will be destined for independent media, civil society, the health sector and the opposition-controlled National Assembly.

In addition, USAID administrator Mark Green announced on Wednesday that the US will commit $36 million in aid to Venezuela, as part of a relief program led by the United Nations. It is not clear at the present time whether this sum is part of the $52 million or an additional disbursement.

The Trump administration had previously diverted over $40 million in aid destined for Central America to fund the Venezuelan opposition. According to a USAID memo seen by the LA Times, the money was destined for salaries, airfare, training, propaganda, among other budget items.

Guaido proclaimed himself president in January and has since led several attempts to oust the Maduro government, including a failed military putsch on April 30.

The new aid package dovetails with a fresh round of US sanctions against Venezuela’s oil sector.

Likewise announced on Tuesday, the new Treasury Department restrictions target four petroleum shipping companies and their respective vessels, which are allegedly involved in transporting oil from Venezuela to Cuba.

The measures block the US-based assets of Cyprus-based Caroil Transport Marine Ltd., as well as Panamanian firms Trocana World Inc., Tovase Development Corp, and Bluelane Overseas SA. Also sanctioned are the Carlota C, the Sandino, the Petion, and the Giralt.

In a statement, Treasury Secretary Steven Mnuchin railed against Cuba for continuing to import Venezuelan crude despite the Trump administration imposing an oil embargo in January.

“The United States continues to take strong action against the former illegitimate Maduro regime and the malign foreign actors who support it. Maduro’s Cuban benefactors provide a lifeline to the regime and enable its repressive security and intelligence apparatus,” he stated.

However, in spite of sanctions, oil exports to Cuba have continued steadily, with industry sources reporting an increase so far in September to 119,000 barrels per day (bpd), up from 70,000 bpd in August.

Washington’s latest measures followed the reincorporation of the pro-government lawmakers into the opposition-controlled National Assembly on Tuesday.

The step forms part of an agreement reached last week between the Maduro government and minority sections of the opposition.

“This is a political, democratic and patriotic gesture,” said Tania Diaz, who led the ruling PSUV delegation. “Our forces have insisted on mechanisms of dialogue and understanding as a formula to secure peace in the country,” she added.

In addition to returning ruling party deputies to parliament, the agreement also contains provisions regarding a new national electoral council and electoral guarantees as well as joint efforts to circumvent US sanctions.

Despite welcoming the return of the pro-government bloc, opposition legislators questioned whether some PSUV legislators could legally take their posts in the National Assembly. Diaz and several other PSUV deputies are also members of the National Constituent Assembly, which was elected amid a violent anti-government uprising in 2017. For his part, PSUV lawmaker Carreño replied that it was up to the Supreme Court to rule on the matter.

The opposition-majority National Assembly has been in contempt of court since 2016, after an escalating dispute with Venezuela’s judiciary saw the body’s decisions ruled “null and void.” To this date, there has been no statement from the Supreme Court concerning the legal status of the legislative body.

For its part, Washington has ruled out negotiations with Caracas, vowing to maintain sanctions as long as the Maduro government remains in power.

Lucas Koerner reporting from Philadelphia and Ricardo Vaz from Caracas.