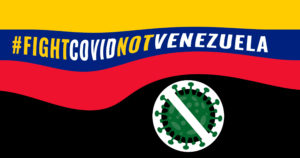 1.  Social Media Shareable (JPG above)
2.  Social Media Profile Filter
https://www.facebook.com/profilepicframes/?overlay_source_object_id=10158373702629695&selected_overlay_id=2546342089015486&__tn__=HH-R
3. No US Intervention in VZ without Congressional Approval:
The goal of this project is to find at least 5 members of Congress who will make a statement, or at least tweet, a reminder to The White House that only Congress can declare an act of war.  Outreach should be directed to your member of the House and/or Senate if he/she is a co-sponsor HR 1004 or S.J. Res 11.  DEADLINE:  Friday, April 17
–https://www.congress.gov/bill/116th-congress/house-bill/1004/cosponsors?searchResultViewType=expanded&KWICView=false
–https://www.congress.gov/bill/116th-congress/senate-joint-resolution/11/cosponsors?searchResultViewType=expanded&KWICView=false

This is for outreach to members of congress who signed either HR1004 or SJ Res 11 unauthorized US military intervention in Venezuela. We are asking them to make a public statement (perhaps just a Tweet) against Trump’s latest military escalation targeting Venezuela.

Here is a sample tweet:  “While the world battles COVID-19, the US is engaged in the biggest military operations in Latin America in 30 years. We again must warn President Trump against using unauthorized military force against Venezuela.”

As a co-sponsor of HR 1004 (or S.J. Res 11 check which one they did; you can see below) prohibiting the Trump administration from engaging in unauthorized military intervention in Venezuela, we are appealing to you to make a public statement, perhaps via social media, reiterating this position.

This is especially urgent now given that the Trump administration is currently carrying out the largest military operation in Latin America in 30 years, and has made it clear that alleged Venezuelan “narco-terrorism” is the target. It’s worth noting that the last deployment of similar size took place at the time of the 1989 US military intervention in  Panama to remove General Manuel Noriega.

President Trump announced the deployment at the beginning of an April 1 COVID-19 press conference. According to Defense Secretary Mark Esper, “included in this force package are Navy destroyers and littoral combat ships, Coast Guard Cutters, P.A. patrol aircraft, and elements of an Army security force assistance brigade.” General Mark Milley, Chairman of the Joint Chiefs of Staff, added that there are “thousands of sailors, Coast Guardsman, soldiers, airmen, Marines involved in this operation.”

The announcement came a week after Attorney General William Barr unsealed an indictment against Maduro and 13 other current or former Venezuelan officials.  The officials were accused of “narco-terrorism” and multi-million dollar cash rewards were offered for information leading to their capture, including a $15 million reward for Maduro’s capture.  Maduro was also accused of being the leader of the so-called “Cartel of the Suns,” though experts have noted that there is no evidence that such a cartel exists.

In their remarks during the press conference, Trump administration officials made it clear that the main target of this massive military mission is, in the words of Esper,  “the illegitimate Maduro regime in Venezuela” that relies “on the profits derived from the sale of narcotics to maintain its oppressive hold on power.” National Security Advisor Robert O’Brian said “we will continue to execute our maximum pressure policy to counter the Maduro regime’s malign activities, including drug trafficking.”

With cities in Venezuela under lockdown, and the country struggling to address a looming public health crisis and yet another economic shock,  it is clear that the Trump administration sees a new opportunity to exercise “maximum pressure” to try to achieve regime change. President Trump has been threatening military intervention since 2017, and this massive deployment of naval assets in the vicinity of Venezuela takes the U.S. one step closer to an armed attack. .

According to Foreign Policy, the U.S. Defense Department opposed deploying such a great quantity of military assets to the Caribbean, especially at a time when the U.S. military is having to confront the spread of Covid-19 (as witnessed recently aboard the USS Roosevelt). According to a former senior government official, Trump’s decision to deploy these assets over the objections of DOD commanders was driven entirely by “politics.”.

A senior official at the Pentagon told Newsweek that “the premise of the operation is a surge against drug trafficking—but when have you ever heard of using that type of force for drugs? (…) The underlying purpose is to pressurize the Maduro regime.”

As a recent report by the Washington Office on Latin America reveals, the U.S. government’s own data has shown that only a small fraction of Colombian cocaine shipments pass through Venezuela on their way to the U.S.  According to this data, six times more cocaine transited through Guatemala than Venezuela in 2018.

Venezuela is battling COVID-19 within its own borders, as we are doing here at home. The country is also experiencing a deep economic crisis and facing severe shortages of medical supplies, a situation that has been compounded by U.S. unilateral economic sanctions.   President Trump has no business deploying U.S. military assets against Venezuela, a country that in no shape or form represents a threat to the security of the United States, especially not now when a pandemic is raging around the world and in our own country.

We would greatly appreciate it if you would speak out against this unjustified and dangerous escalation.